I received a copy of this book via NetGalley in exchange for an honest review. All thoughts and opinions expressed here are my own. 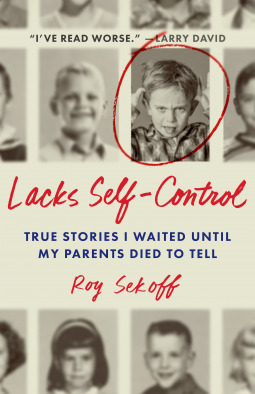 A rollicking collection of true tales from the founding editor of the Huffington Post.

Told with zinging wit and zero propriety, Sekoff’s collection of true tales—caroming between his Miami childhood, overstimulated adolescence, and celebrity-adjacent adulthood—showcases his caustic yet surprisingly sweet sense of humor. Whether he’s describing a youthful encounter with a killer crocodile, an ill-fated attempt to make off with a tissue containing Oprah’s tears, or that time Chevy Chase grabbed his balls at a funeral, Sekoff is a lively, irreverent raconteur whose sharp observations wring laughs out of a ludicrous yet relatable life.

If you’ve been following this blog for a while now, you’d have noticed that I really love memoirs of famous people. And they almost always have quirky names. Remember The Totally Unscientific Study of the Search for Human Happiness by Paula Poundstone? Or The Art of Living Other People’s Lives: Stories, Confessions, and Memorable Mistakes by Greg Dybec?

Lacks Self-Control, for me, was even better than your usual famous person’s memoir. Most of it was because of how relatable I found it. Roy Sekoff is effortlessly funny, witty, and has his own droll style of writing; you can’t help but love him.

You know how all of us have a funny story we tell at dinner parties? Sekoff has like 10 of them in this book. No, really. How do I become friends with this guy?

Here are some of the lines from this absolute hoot that I liked:

1. For me, Lacks Self-Control means speaking up and speaking out. Not only saying that the emperor has no clothes, but also pointing out that his penis is smaller than average.

2. I wasn’t a bad student; but anyone hoping to be valedictorian needn’t bother looking over their shoulder to see if I was gaining on them. If my school had graded using words instead of letters, my GPA would’ve been “Meh.”

3. I was the picture of health. The “Before” picture.

4. I could count the number of times I’ve seen her be unkind to someone on Oscar Pistorius’s toes.

I could go on and on.

In all, this book’s really funny, and I’m no person to tell you how to lead your life, but what are you even doing if you haven’t read it yet?

7 thoughts on “Lacks Self-Control: True Stories I Waited Until My Parents Died to Tell by Roy Sekoff”