I read the Penguin India edition of this book for the Indian Lit Readathon and was approved for the Grove Atlantic edition (releasing this October) on NetGalley an entire month after I requested it. 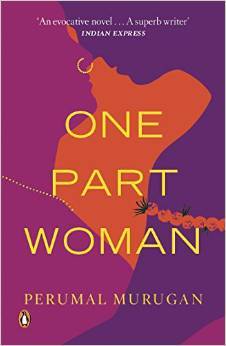 All of Kali and Ponna’s efforts to conceive a child—from prayers to penance, potions to pilgrimages—have been in vain. Despite being in a loving and sexually satisfying relationship, they are relentlessly hounded by the taunts and insinuations of the people around them. Ultimately, all their hopes and apprehensions come to converge on the chariot festival in the temple of the half-female god Ardhanareeswara and the revelry surrounding it. Everything hinges on the one night when rules are relaxed and consensual union between any man and woman is sanctioned. This night could end the couple’s suffering and humiliation. But it will also put their marriage to the ultimate test. Acutely observed, One Part Woman lays bare with unsparing clarity a relationship caught between the dictates of social convention and the tug of personal anxieties, vividly conjuring an intimate and unsettling portrait of marriage, love and sex.

Perumal Murugan is from the same Indian state I am from. That and the fact that this book was heavily challenged by caste-based groups when it first released made me pick it up. One Part Woman is a compelling story about how in some fringes of the Indian society, people are ostracized if they cannot have children.

A more mellow (but annoying nonetheless) form of this takes place in Indian metropolitan cities with educated families. One thing I’ve observed in my family is how couples are consistently hounded and harangued by the elders of the family to have children. As soon as a couple gets married, the first and most common question directed at them is “any good news?”. The good news being a pregnancy. And God forbid they say they don’t want children. The interrogator’s sharp intake of breath and unsolicited advice on why you actually should have kids will make you want to avoid any social gathering like the plague.

Kali and Ponna’s world is an extreme form of this. Perumal Murugan has accurately portrayed how the fringe societies of Southern India are. If you don’t have children, get ready for society’s mockery, unsolicited advice from elders, and suggestions from random people about rituals you can perform at temples to have children.

About three-quarters of the book is about all the problems Kali and Ponna have faced because they weren’t able to conceive a child–not being invited out anymore, taunts from neighbors, and insults about Ponna being unlucky because she can’t get pregnant. In the end, their mothers come up with a solution. They decide to send Ponna to a chariot festival where inhibitions are low and any man and woman can have consensual sex. The rest of the story is about how this affects Kali and Ponna’s relationship.

One Part Woman is an excellent story that holds a mirror up to Indian society’s obsession with having children. Do read it if you want an accurate portrayal of Southern India and see how religious beliefs and conventions can hurt love and marriage.

“Why do you think we have and raise children? For them to grow up well? No. We do it because we seem to need it for ourselves. That is why we have children and raise them. And then in old age we complain that those children are not taking care of us. This is plain madness.”

11 thoughts on “One Part Woman by Perumal Murugan”